Excerpts from the address of Habib Murtada bin Tohir at the Hawl of Al-Allamah Ash-Shaykh Umar bin Abdullah al-Khatib on 29 January 2017:

The person we are commemorating is Al-Allamah Ash-Shaykh Umar bin Abdullah bin Ahmad bin Salim al-Khatib. May Allah reward him and preserve his family, and may Allah reward his parents for raising him in a manner most pleasing to Allah. And may the mercy of Allah descend upon us all as it is said:

Allah’s mercy descends at the mention of the solihin (the pious). 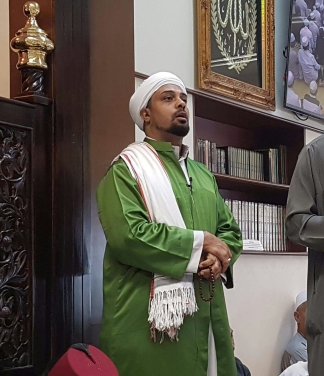 Shaykh Umar (b. 1326H) was born and raised in the blessed city of Tarim, Hadramaut, a city known to cultivate and produce the ulama’ (scholars) of Islam as how trees are cultivated and produced from the planting of seeds in the ground.

Shaykh Umar’s parents were known to be religious and had taken great care to impart to Shaykh Umar and his siblings some of the most important things parents should be imparting to children in their most formative years – Islamic belief and good manners. In his early prepubescent  years, Shaykh Umar was under the personal tutelage of his parents and his uncle.

Thereafter, at the age of 9, Shaykh Umar was sent to memorise the Quran at Qubbah Abu Murayyam, a famous school for Quran memorisation in Tarim, wherein he had memorised the entire Quran in a short span of time. Following that, Shaykh Umar was enrolled in Rubat Tarim, the foremost Islamic studies seminary in Tarim, where he had shown exceptional ability and excelled in his studies, earning him the praise of his teachers and contemporaries.

He mastered the Islamic sciences of fiqh (Islamic law) and nahu (Arabic grammar) at a young age and his counsel in matters of religion was much sought after, even at an early age.

His Knowledge and Good Manners

It is said in some lines of poetry:

ما الفخــــر إلا لأهل العلم إنهم *** على الهدى لمن استهدى أدلاء
There is no pride (in anyone) except for the Ahl al-‘Ilm (People of Knowledge).
Verily, they guide whosoever seeks guidance

وقدر كل امرئ ما كان يحسنه *** والجاهـلون لأهل العـلم أعداء
and apportion to one in accordance to what is good for him.
As for the Jahilun (People of Ignorance); they are the ones who opposed the Ahl al-‘Ilm.

Shaykh Umar held the outward appearance of an Ahl al-‘Ilm but beyond that, Shaykh Umar was also a symbol of tawadhu’ (humility) and husn al-khuluq (good manners). It is known that he fled the qudha’ (being appointed a seat in judiciary) as he did not want to be associated with authority and power (ed. he rejected worldly gains from sacred knowledge).

When we look back at the biographies of the people whose lives we have been commemorating these past few days – Habib Muhammad bin Salim al-Attas, Habib Nuh bin Muhammad al-Habshi, and now Al-Allamah Ash-Shaykh Umar bin Abdullah al-Khatib – we see something in common in all of them; how they honoured others and beauty in the manner they interacted with people. We learn interpretation of the sunnah of the Prophet ﷺ in day to day dealings from their lives. It is well-known that Shaykh Umar mastered the outward fiqh but beyond that, he also mastered the inward fiqh and this was evident from the many anecdotes from Shaykh Umar’s life that have been related to us; people were drawn to him as he interacted with sincerity and love.

His Love for the Ahl Al-Bayt

Shaykh Umar was also known to have immense love for the Ahl al-Bayt (the members of the household of the Prophet ﷺ); his love of the Ahl al-Bayt gained him the love of his Lord and this love increased the blessings that have been bestowed upon Shaykh Umar.

We also ask that Allah preserves the Habaib and Mashyaykh present with us in this blessed gathering.

And we ask Allah to preserve Shaykh Yahya and Shaykh Ali, the sons of Shaykh Umar, and the rest of his children and offspring.

May Allah benefit all of us through him and grant us a portion of his knowledge. Amin. 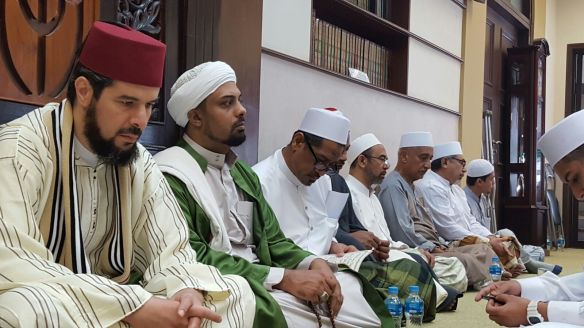